Oh, the people would come from
far away
To dance all night ’til the break of day
When the caller hollered, “Do-Si-Do”
They knew Uncle Pen was ready to go

Chorus
Late in the evening,
about sundown
High on the hill,
an’ above the town
Uncle Pen played the fiddle, oh,
how it’d ring
You could hear it talk,
you could hear it sing

Explore Form in “Uncle Pen” and Learn About Bluegrass Instruments

Move to the Form of “Uncle Pen”

Creative Extension: Write Lyrics About How Bluegrass Got Its Name 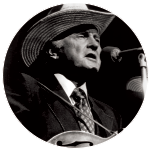 “Uncle Pen” is a famous bluegrass song written by mandolinist Bill Monroe, who is known as the “Father of Bluegrass.” Bill Monroe wrote this song as a tribute to his uncle, Pendleton “Pen” Vandiver, who was a fiddler and raised Monroe after his parents died.

Go to LESSON 2: EXPLORING “IN THE PINES”