Explore the Hidden Message in “Follow the Drinking Gourd” 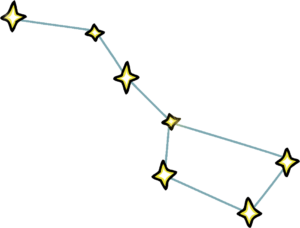 In Unit 1, we learned that the ring shout was sung by slaves in the United States. Slaves also often wrote songs that had hidden meanings. Many times these songs provided clues to help other slaves escape from captivity.

The “drinking gourd” was the name for a hollow gourd that the slaves would use to collect water. However, in this song, it is also a code name for the Big Dipper—a constellation of stars that helped escaping slaves figure out which direction to travel.

If you wanted to use code words to help someone find your school, which clues would you use?

Add the words Underground Railroad and gourd to the Musical Word Wall.