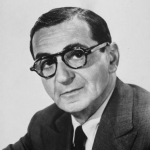 Irving Berlin (1888–1989) is considered one of the greatest songwriters in American history. He was born in Russia and came to the US when he was five. Berlin wrote more than 1,500 songs, including hundreds of hits. “Blue Skies” was composed as part of a musical called Betsy. Audiences loved the song so much they demanded 24 encores of it on the show’s opening night!

Blue skies smiling at me
Nothing but blue skies, Do I see

Bluebirds singing a song,
Nothing but bluebirds all day long.

Never saw the sun shining so bright
Never saw things going so right
Noticing the days hurrying by
When you’re in love, my how they fly.

Blue days all of them gone
Nothing but blue skies from now on.

Creative Extension: My Own Skyline Melody