Learn about Lyrics and the Blues 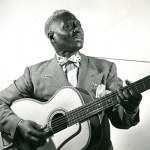 “Good Morning Blues” was composed by Huddie Ledbetter (c. 1888–1949), better known as Lead Belly. Born in Louisiana, he started playing music when he was two years old, and left home to play professionally when he was a teenager. He played many instruments, but is best known for his virtuosity on the 12-string guitar. He composed over 500 songs during his lifetime. His songs and his playing influenced generations of musicians in all genres of American music.