Melody now takes us on a journey from Harlem in New York City to Athens, Georgia to meet our next singer, Dan. Use SG40, SG41 and SG42 to meet Dan and prepare your students to learn about klezmer music.

Klezmer music is the folk music of the Ashkenazi Jews of Eastern Europe. The Yiddish word “klezmer” originally meant “musician.” Klezmer music dates back to the 9th century and, although secular, is rooted in music sung by cantors in synagogues (Jewish congregations), as well as other folk musics of Eastern Europe. Originally it was played with whatever instruments were available, but now is most closely associated with the fiddle, clarinet, and accordion. It was most often played at joyful celebrations, such as weddings, and is now played around the world. 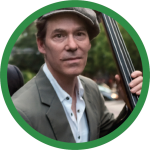 Based in Athens, Georgia, Dan has played bass for the rock band Five Eight since its inception in 1988, but klezmer music was a large part of his life and identity growing up in a Jewish household. In 2007, he wanted to expand his artistry, and began searching for musicians to form a klezmer band of his own. Klezmer Local 42 was formed in 2009 and incorporates classic rock, swing, hip hop, and many other influences into its music.