Melody now takes us on a journey to Isle of Hope in Savannah to meet our next artist, Eric. Use SG29, SG30 and SG31 to meet Eric and prepare your students to learn about blues.

Blues music is a living tradition that originated in African American communities across the American south in the late 1800s, with roots in slave songs including spirituals, work songs, country string ballads, and field hollers. It is characterized by call-and-response patterns, blue notes, and lyrics that often address sadness and hard times as a way of making people feel better. Early blues musicians typically played acoustic guitar, piano, or harmonica, and sang songs at weekend picnics, parties, and juke joints in the communities throughout the South. Entering popular American culture around the turn of the century, the blues continued to evolve in cities like Chicago, St. Louis, and Detroit as people from southern Black communities migrated north to avoid Jim Crow laws and segregation. With electric instruments and bigger bands, blues musicians began to drive people onto the dance floor. The blues is one the most influential styles of American music, and is part of the foundations of jazz, R&B, soul music, rock ‘n’ roll, and hip-hop. 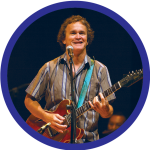 Eric grew up in Savannah, where he started his career and quickly became a local phenomenon. Eric and his band play many different styles of the blues, from “gut-bucket” Delta blues to urban funk with echoes of R&B, hard rock, Southern-fried jam, and even Texas swing. An audience favorite, this is Eric’s third appearance with SMF’s Musical Explorers.

Students explore how expression conveys emotions and influences the feeling of a song.
→ Go to Lesson 2: Learning “Little Red Rooster”