Melody now takes us on a journey from Isle of Hope to Harlem in New York City to meet our next singer, Brianna. Use SG35, SG36 and SG37 to meet Brianna and prepare your students to learn about jazz.

Jazz is a quintessentially American art form. It is a hybrid created by the convergence of African traditions brought by slaves with western European traditions brought by colonists in the new world—and specifically in the ethnic and cultural melting pot that was New Orleans at the turn of the 20th century. The essence of jazz is swing, the inimitable rhythmic lilt that lends jazz its distinctive feel and underlying groove. Jazz spread to cities throughout the US during the Great Migration, the movement of black Americans leaving the southern states after the Civil War. It was during the Harlem Renaissance in the 1920s that jazz established its foothold in New York City; in time New York became the jazz capital of the world. 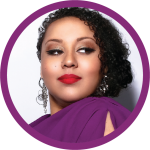 Brianna grew up surrounded by music. Her father, Charlie Thomas, was a vocalist and percussionist, and Brianna began appearing with his band at the age of six. At eight, she won the first of 13 trophies in area talent shows. Before she reached her teens, she was touring Europe with the Peoria Jazz All-Stars. Brianna’s soulful singing is deeply enriched by an understanding of the masterful voices of jazz history. It incorporates the sass, emotionalism, and deep instrumental knowledge of Sarah Vaughan; the coyness of Nancy Wilson; the scatting of Ella Fitzgerald; and the stylistic breadth and vocal grandeur of Dianne Reeves.

Students will sing “Blue Skies,” learning about some of the key musical elements found in jazz.
→ Go to Lesson 1: Learning “Blue Skies”

Lesson 2: Learning “Take the A Train”